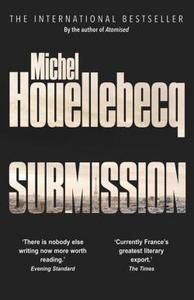 Submission (French: Soumission) is a novel by French writer Michel Houellebecq. The French edition of the book was published on 7 January 2015 by Flammarion, with German (Unterwerfung) and Italian (Sottomissione) translations also published in January. The book instantly became a bestseller in France, Germany and Italy. The English edition of the book, translated by Lorin Stein, was published on 10 September 2015.The novel imagines a situation in which a Muslim party upholding Islamist and patriarchal values is able to win the 2022 presidential election in France with the support of the Socialist Party. The book drew an unusual amount of attention because, by macabre coincidence, it was released on the day of the Charlie Hebdo shooting.The novel mixes fiction with real people: Marine Le Pen, François Hollande, François Bayrou, Manuel Valls, and Jean-François Copé, among others, fleetingly appear as characters in the book.
Read more or edit on Wikipedia