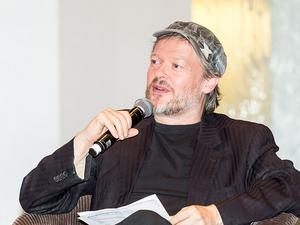 Michael Schmidt-Salomon (born 14 September 1967 in Trier) is a German author, philosopher, and public relations manager. As chairman of the Giordano Bruno Foundation, a humanist organization that is critical of religion, he has been identified as Germany's "Chief Atheist." His books include the Manifesto of Evolutionary Humanism: A Plea for a Contemporary Culture, and Die Kirche im Kopf (The Church in the Head). His children's book Wo bitte geht's zu Gott?, fragte das kleine Ferkel ("Which is the way to God, please?, little Piglet asked") caused controversy for its depiction of religion.
Read more or edit on Wikipedia