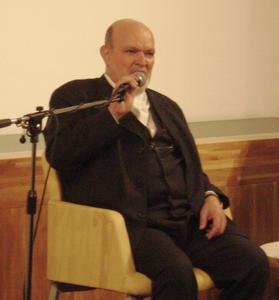 Salvatore Niffoi (born 1950, in Orani) is an Italian writer. Niffoi is a representative of the so-called Sardinian Literary Nouvelle Vague, or Sardinian Literary Spring, i. e. the Sardinian narrative of today, which was initiated by Giulio Angioni, Salvatore Mannuzzu and Sergio Atzeni, following the work of individual prominent figures such as Grazia Deledda, Emilio Lussu, Giuseppe Dessì, Gavino Ledda, Salvatore Satta. His prose is mostly a mixture of Italian and Sardinian. Niffoi lives in Orani, a small village of Barbagia, in the province of Nuoro, where he was a middle school teacher until 2006. He started his career as a novelist in 1997, with his first work, Collodoro. In 2006, with the novel La vedova scalza he won the Campiello Prize.
Read more or edit on Wikipedia