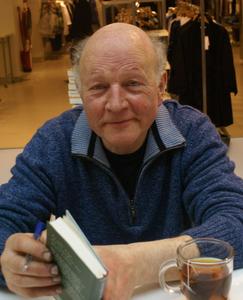 Maarten 't Hart (born 25 November 1944 in Maassluis) is a Dutch writer. Trained as a biologist in zoology and ethology at the Leiden University, he taught that subject before becoming a full-time writer in the 1980s, having made his debut as a novelist in 1971 under the name Martin Hart with Stenen voor een ransuil ("Stones for a Long-Eared Owl"). He is the author of many novels, including Het Woeden der Gehele Wereld and De kroongetuige. His books have been translated into a number of European languages, and he is especially popular in Germany. Three of his novels, Een vlucht regenwulpen (A Flight of Curlews, trans. 1986), De aansprekers (Bearers of Bad Tidings, trans. 1983), and De zonnewijzer (The Sundial, trans. 2004) have appeared in English, as have a few of his short stories. The themes of his novels, which often have an autobiographical component, include: the hometown of his youth, Maassluis the strict form of the Protestantism with which he was brought up, and his rebellion against it the love of a man for a woman the relationship between an elderly man and a young man (e.g. a father and his son, a teacher and a student) guilt.His writings are full of detailed descriptions of nature (e.g. the weather, insects, plants) and show his passionate love for classical music (especially the music of the composers Bach, Mozart and Schubert). Hart is supporter of the Party for Animals, and, in 2004, agreed with the party to underline that by becoming a candidate in the European elections. However, for this he needed an official identity document, and he has no driving licence, and had neither a passport nor another identity document (he had not been abroad for 10 years), and, for reasons of principle, did not want to get one for this purpose. He is also a prominent radio and television personality, and a regular contributor to daily newspapers. He currently lives in Warmond, close to Leiden, with his wife. His chief pastimes are music – he plays the piano and the organ – and reading. He says he reads six books a week, in Dutch, English, German, and French. He knows very little about films and rarely watches one. He does not want to be involved in films based on his books. He was, however, "rat consultant" to Werner Herzog for the film Nosferatu the Vampyre. This turned out to be a disagreeable experience about which he wrote a story, "Ongewenste zeereis", that appeared in 2004 in Granta under the title "Rats".
Read more or edit on Wikipedia