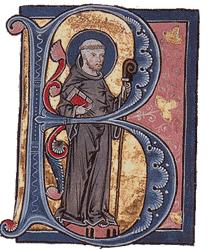 Bernard of Clairvaux (Latin: Bernardus Claraevallensis; 1090 – 20 August 1153), venerated as Saint Bernard, was a Burgundian abbot and a major leader in the revitalization of Benedictine monasticism through the nascent Cistercian Order. He was sent to found Clairvaux Abbey at an isolated clearing in a glen known as the Val d'Absinthe, about 15 kilometres (9.3 mi) southeast of Bar-sur-Aube. In the year 1128, Bernard attended the Council of Troyes, at which he traced the outlines of the Rule of the Knights Templar, which soon became an ideal of Christian nobility. On the death of Pope Honorius II in 1130, a schism arose in the church. Bernard was a major proponent of Pope Innocent II, arguing effectively for his legitimacy over the Antipope Anacletus II. In 1139, Bernard attended the Second Council of the Lateran and criticized Peter Abelard vocally. Bernard advocated crusades in general and convinced many to participate in the unsuccessful Second Crusade, notably through a famous sermon at Vézelay (1146). Bernard was canonized just 21 years after his death by Pope Alexander III. In 1830 Pope Pius VIII declared him a Doctor of the Church.
Read more or edit on Wikipedia