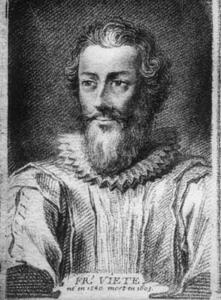 François Viète, Seigneur de la Bigotière (Latin: Franciscus Vieta; 1540 – 23 February 1603) was a French mathematician whose work on new algebra was an important step towards modern algebra, due to its innovative use of letters as parameters in equations. He was a lawyer by trade, and served as a privy councillor to both Henry III and Henry IV of France.
Read more or edit on Wikipedia