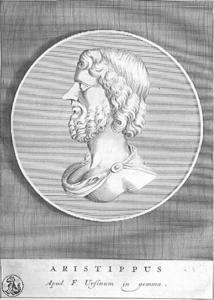 Greek philosopher and founder of the Cyrenaic school of Philosophy

Aristippus of Cyrene (; Ancient Greek: Ἀρίστιππος ὁ Κυρηναῖος; c. 435 – c. 356 BCE) was a hedonistic Greek philosopher and the founder of the Cyrenaic school of philosophy. He was a pupil of Socrates, but adopted a very different philosophical outlook, teaching that the goal of life was to seek pleasure by adapting circumstances to oneself and by maintaining proper control over both adversity and prosperity. His view that pleasure is the only good came to be called ethical hedonism. Despite having two sons, Aristippus identified his daughter Arete as the "intellectual heiress" of his work.There are indications that Aristippus was conflated with his grandson, Aristippus the Younger.
Read more or edit on Wikipedia