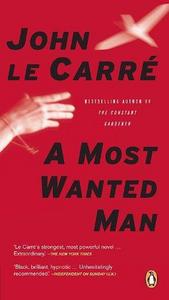 A Most Wanted Man

A Most Wanted Man is a thriller/espionage novel by John le Carré published in September 2008 by Hodder & Stoughton in the United Kingdom and in October 2008 by Scribner in the United States.A young Chechen ex-prisoner arrives illegally in Germany, practically uneducated and destitute, but with a claim to a fortune held in a private bank. This novel, set in Hamburg where the author was once a British agent and consul, is based on the contemporary themes of the international war on terror, money laundering, and the conflicting interests of different officers and agents and laymen who are affected. The novel provides an extended, if oblique, critique of the American policy under President George W. Bush of extraordinary rendition. The novel's events and characters were inspired by the real-life story of Murat Kurnaz, a Turkish citizen and legal resident of Germany who, after being arrested in Pakistan in 2001, was detained and claims to have been tortured in American military detention camps, first at Kandahar in Afghanistan and then at Guantanamo Bay in Cuba, before being released in 2006.
Read more or edit on Wikipedia

date of publication: 2008
genre: crime novel
follows: The Mission Song
followed by: Our Kind of Traitor