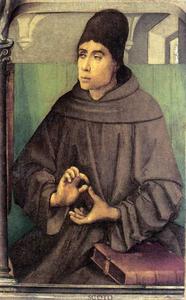 John Duns Scotus (c. 1265/66 – 8 November 1308), commonly called Duns Scotus ( SKOH-təs; Ecclesiastical Latin: [duns ˈskotus]; "Duns the Scot"), was a Scottish Catholic priest and Franciscan friar, university professor, philosopher, and theologian. He is one of the four most important philosopher-theologians of Western Europe in the High Middle Ages, together with Thomas Aquinas, Bonaventure, and William of Ockham.Scotus has had considerable influence on both Catholic and secular thought. The doctrines for which he is best known are the "univocity of being", that existence is the most abstract concept we have, applicable to everything that exists; the formal distinction, a way of distinguishing between different aspects of the same thing; and the idea of haecceity, the property supposed to be in each individual thing that makes it an individual. Scotus also developed a complex argument for the existence of God, and argued for the Immaculate Conception of Mary. Duns Scotus was given the scholastic accolade Doctor Subtilis ("the Subtle Doctor") for his penetrating and subtle manner of thought. He was beatified by Pope John Paul II in 1993.
Read more or edit on Wikipedia