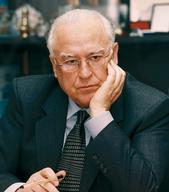 Viktor Stepanovich Chernomyrdin (Russian: Ви́ктор Степа́нович Черномы́рдин, IPA: [ˈvʲiktər sʲtʲɪˈpanəvʲɪtɕ tɕɪrnɐˈmɨrdʲɪn]; 9 April 1938 – 3 November 2010) was a Soviet and Russian politician and businessman. He was the Minister of Gas Industry of the Soviet Union (13 February 1985 – 17 July 1989), after which he became first chairman of Gazprom energy company and the second-longest-serving Prime Minister of Russia (1992–1998) based on consecutive years. He was a key figure in Russian politics in the 1990s and a participant in the transition from a planned to a market economy. From 2001 to 2009, he was Russia's ambassador to Ukraine. After that, he was designated as a presidential adviser.Chernomyrdin was known in Russia and Russian-speaking countries for his language style, which contained numerous malapropisms and syntactic errors. Many of his sayings became aphorisms and idioms in the Russian language, one example being the expression "We wanted the best, but it turned out like always." (Russian: Хотели как лучше, а получилось как всегда).Chernomyrdin died on 3 November 2010 after a long illness. He was buried beside his wife in Novodevichy Cemetery on 5 November, and his funeral was broadcast live on Russian federal TV channels. Source: Wikipedia (en)