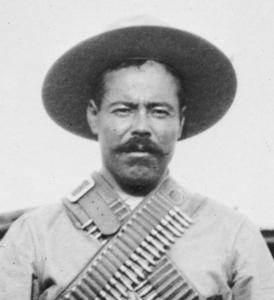 Francisco Villa (UK: , also US: ; Spanish: [ˈbiʎa]; born José Doroteo Arango Arámbula, 5 June 1878 – 20 July 1923) was initially a bandit, who became a general in the Mexican Revolution. He was a key figure in the revolutionary violence that forced out President Porfirio Díaz and brought Francisco I. Madero to power in 1911. When Madero was ousted by a coup led by General Victoriano Huerta in February 1913, he led anti-Huerta forces in the Constitutionalist Army 1913–14. The commander of the coalition was civilian governor of Coahuila Venustiano Carranza. After the defeat and exile of Huerta in July 1914, Villa broke with Carranza. Villa dominated the meeting of revolutionary generals that excluded Carranza and helped create a coalition government that was weak and ineffective. Emiliano Zapata and Villa became formal allies in this period, but it was only in principle. Like Zapata, Villa was strongly in favor of land reform, but his plans were not implemented when he had power. At the height of his power and popularity in late 1914 and early 1915, the U.S. considered recognizing him as Mexico's legitimate authority. Civil war broke out when Carranza challenged Villa. Villa was decisively defeated by Constitutionalist General Álvaro Obregón in summer 1915, and the U.S. aided Carranza directly against Villa in the Second Battle of Agua Prieta in November 1915. Much of Villa's army left after Villa's defeat on the battlefield and his lack of resources to buy arms and pay soldiers' salaries. Angered at the U.S. aid to Carranza, Villa conducted a raid on the border town of Columbus, New Mexico to goad the U.S. to invade Mexico in 1916-17. Despite a major contingent of soldiers and the latest military technology, the U.S. failed to capture Villa. When President Carranza was ousted from power in 1920, Villa negotiated an amnesty with interim President Adolfo de la Huerta and was given a landed estate, on the condition he retire from politics. He was assassinated in 1923. Although his faction did not prevail in the Revolution, he is one of its most charismatic and prominent figures. In life, Villa helped fashion his own image as an internationally known revolutionary hero, starring as himself in Hollywood films and giving interviews to foreign journalists, most notably John Reed. After his death he was excluded from the pantheon of revolutionary heroes until the Sonoran generals Obregón and Calles, whom he battled during the Revolution, were gone from the political stage. Villa's exclusion from the official narrative of the Revolution might have contributed to his continued posthumous popular acclaim. He was celebrated during the Revolution and long afterward by corridos, films about his life, and novels by prominent writers. In 1976, his remains were reburied in the Monument to the Revolution in Mexico City in a huge public ceremony.
Read more or edit on Wikipedia