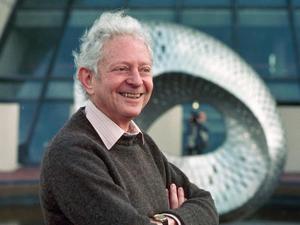 Leon Max Lederman (July 15, 1922 – October 3, 2018) was an American experimental physicist who received the Nobel Prize in Physics in 1988, along with Melvin Schwartz and Jack Steinberger, for research on neutrinos. He also received the Wolf Prize in Physics in 1982, along with Martin Lewis Perl, for research on quarks and leptons. Lederman was director emeritus of Fermi National Accelerator Laboratory (Fermilab) in Batavia, Illinois. He founded the Illinois Mathematics and Science Academy, in Aurora, Illinois in 1986, where he was Resident Scholar Emeritus from 2012 until his death in 2018.An accomplished scientific writer, he became known for his 1993 book The God Particle establishing the popularity of the term for the Higgs boson.
Read more or edit on Wikipedia