Maxine Hong Kingston (Chinese: 湯婷婷; born Maxine Ting Ting Hong; October 27, 1940) is a Chinese American author and Professor Emerita at the University of California, Berkeley, where she graduated with a BA in English in 1962. Kingston has written three novels and several works of non-fiction about the experiences of Chinese Americans. Kingston has contributed to the feminist movement with such works as her memoir The Woman Warrior, which discusses gender and ethnicity and how these concepts affect the lives of women. She has received several awards for her contributions to Chinese American literature, including the National Book Award for Nonfiction in 1981 for China Men.Kingston has received significant criticism for reinforcing racist stereotypes in her work and for fictionalizing traditional Chinese stories in order to appeal to Western perceptions of Chinese people. She has also garnered criticism from Asian scholars for her "over-exaggeration of Asian American female oppression".
Read more or edit on Wikipedia 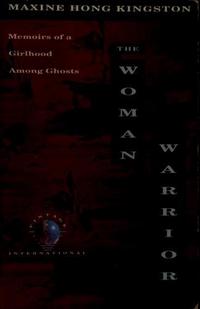 The woman warrior: memoirs of a girlhood among ghosts