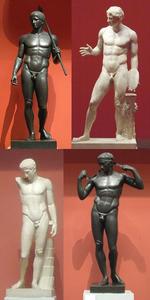 Polykleitos (Ancient Greek: Πολύκλειτος) was an ancient Greek sculptor in bronze of the 5th century BCE. Alongside the Athenian sculptors Pheidias, Myron and Praxiteles, he is considered one of the most important sculptors of classical antiquity. The 4th century BCE catalogue attributed to Xenocrates (the "Xenocratic catalogue"), which was Pliny's guide in matters of art, ranked him between Pheidias and Myron. He is particularly known for his lost treatise (a canon of body proportions), the Canon of Polykleitos, setting out his mathematical basis of an idealised male body shape. None of his original sculptures are known to survive, but there are many of what are believed to be later copies in marble, mostly Roman.
Read more or edit on Wikipedia