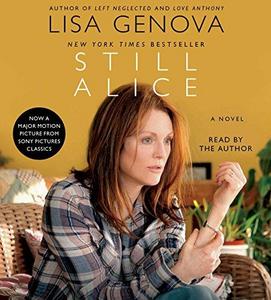 Still Alice is a 2007 novel by Lisa Genova, set in Boston. The novel is about a woman who suffers early-onset Alzheimer's disease. Alice Howland, a 50-year-old woman, is a cognitive psychology professor at Harvard and is a world-renowned linguistics expert. She is married to an equally successful husband, and they have three grown children. The disease takes hold swiftly, and it changes Alice’s relationship with her family and the world. It was Genova's first novel.Genova self-published the book in 2007 with iUniverse. Beverly Beckham of The Boston Globe wrote of it, "After I read Still Alice I wanted to stand up and tell a train full of strangers, 'You have to get this book.'" Beckham notes that the story is told from the inside: "This is Alice Howland's story, for as long as she can tell it."The book was later acquired by Simon & Schuster and published in January 2009 by Pocket Books (now Gallery Books). It was on The New York Times best seller list for more than 40 weeks. It has been sold in 30 countries and translated into more than 20 languages.
Read more or edit on Wikipedia