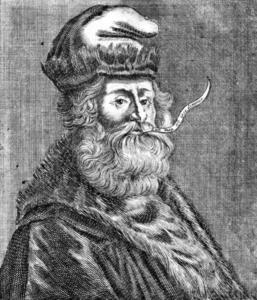 Ramon Llull (Catalan: [rəˈmoɲ ˈʎuʎ]; c. 1232 – c. 1315/16) was a philosopher, theologian, poet, missionary, and Christian apologist from the Kingdom of Majorca. He invented a philosophical system known as the Art, conceived as a type of universal logic to prove the truth of Christian doctrine to interlocutors of all faiths and nationalities. The Art consists of a set of general principles and combinatorial operations. It is illustrated with diagrams. Considered one of the fathers of Catalan literature, he is thought to be the first to use a vernacular language to express philosophical, scientific, and technical ideas. He wrote in Catalan, Latin, and possibly Arabic (although no texts in Arabic survive). Some of his books were translated into Occitan, French, and Castilian during his lifetime.Posthumously he has enjoyed a varied reputation. In Catalonia he is considered a saint, but he has also been condemned as a heretic. In the 20th century he figured in a great deal of literature and art, and became known as a precursor of the computer and pioneer of computation theory.
Read more or edit on Wikipedia