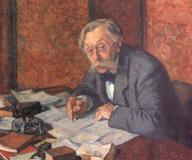 Émile Adolphe Gustave Verhaeren (Dutch: [vərˈɦaːrən]; 21 May 1855 – 27 November 1916) was a Belgian poet and art critic who wrote in the French language. He was one of the founders of the school of Symbolism and was nominated for the Nobel Prize in Literature on six occasions. Source: Wikipedia (en)