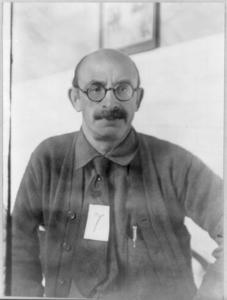 Alexander Berkman (November 21, 1870 – June 28, 1936) was a Russian-American anarchist and author. He was a leading member of the anarchist movement in the early 20th century, famous for both his political activism and his writing. Berkman was born to a Jewish family in Vilna in the Russian Empire (present-day Vilnius, Lithuania) and immigrated to the United States in 1888. He lived in New York City, where he became involved in the anarchist movement. He was the one-time lover and lifelong friend of anarchist Emma Goldman. In 1892, undertaking an act of propaganda of the deed, Berkman made an unsuccessful attempt to assassinate businessman Henry Clay Frick during the Homestead strike, for which he served 14 years in prison. His experience in prison was the basis of his first book, Prison Memoirs of an Anarchist. After his release from prison, Berkman served as editor of Goldman's anarchist journal, Mother Earth, and later established his own journal, The Blast. In 1917, Berkman and Goldman were sentenced to two years in jail for conspiracy against the newly instated draft. After their release from prison, they were arrested—along with hundreds of others—and deported to Russia. Initially supportive of that country's Bolshevik revolution, Berkman and Goldman soon became disillusioned, voicing their opposition to the Soviets' use of terror after seizing power and their repression of fellow revolutionaries. They left the Soviet Union in late 1921, and in 1925 Berkman published a book about his experiences, The Bolshevik Myth. While living in France, Berkman continued his work in support of the anarchist movement, producing the classic exposition of anarchist principles, Now and After: The ABC of Communist Anarchism. Suffering from ill health, Berkman committed suicide in 1936.
Read more or edit on Wikipedia