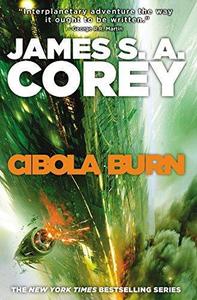 Cibola Burn is a 2014 science fiction novel by James S. A. Corey (pen name of Daniel Abraham and Ty Franck) and the fourth book in The Expanse series. It follows the crew of the Rocinante as they join the flood of humanity out into the galaxy, using the gates built by the ancient civilization that also produced the protomolecule. At the release of Cibola Burn, Orbit Books announced that James S. A. Corey would write three additional books in the series (adding to two that were already planned) to bring the series to nine novels and various short stories. Cibola Burn serves as the basis for the fourth season of the television series The Expanse, which was released by Amazon Video December 13, 2019.
Read more or edit on Wikipedia