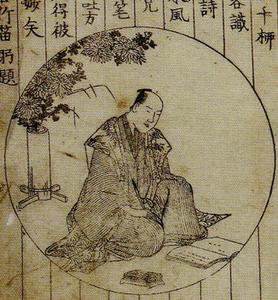 Namiki Sōsuke (Japanese: 並木宗輔; 1695 – c. 1751), also known as Namiki Senryū, was a prominent Japanese playwright who wrote for both kabuki and bunraku (puppet theater). He produced around 47 bunraku plays, nearly 40 of them composed for jōruri, a particular form of musical narrative, and 10 kabuki plays. He is considered the second greatest Japanese playwright after Chikamatsu Monzaemon.Sōsuke was born in Osaka in 1695 and for the early part of his life he was a buddhist monk in the Jōjūji temple in Mihara, Bingo province. He then left priesthood and settled in Osaka to become a playwright, starting as a disciple of Nishizawa Icchū in the Toyotake-za theatre.Collaborating with a number of other playwrights, including Takeda Izumo I and Miyoshi Shōraku, Namiki Sōsuke created some of the most famous traditional Japanese plays. Among them are Natsu Matsuri Naniwa Kagami (1745, Summer Festival: Mirror of Osaka), Sugawara denju tenarai kagami (1746, The Secrets of Sugawara's Calligraphy), Yoshitsune no senbonzakura (1747, The Thousand Cherry Blossoms of Yoshitsune), and Kanadehon chūshingura (1748, The Treasure of the Loyal Retainers). Namiki died while writing Ichinotani futaba gunki (1751, The Chronicle of the Battle of Ichi-no-Tani), but it was completed by some of his collaborators.One of his plays has been translated into English, Summer Festival: Mirror of Osaka (1745, translated by Julie A. Iezzi) in Kabuki Plays on Stage I: Brilliance and Bravado, 1697–1770, edited by James R. Brandon and Samuel L. Leiter.
Read more or edit on Wikipedia