Tomáš Reichental is a Holocaust survivor. He was born in Czechoslovakia in 1935 to Jewish farmers and lived with his family on their farm until he was the age of eight. At this age laws started coming in that prohibited the movement and rights of Jewish people and that is when he and his family went into hiding. Unfortunately he, his mother, his brother and his grandmother were caught and taken to Bergen-Belsen concentration camp in 1944 where they stayed until the camp was liberated by the British in 1945. Tomi is known for his talks about his experience of The Holocaust as a child. He is one of three Holocaust survivors currently residing in Ireland. He gives talks in secondary schools, colleges and at various other events across the country and his aim is to educate people about what happened during the Holocaust so that we can remember the people who died in it and so it never happens again: "After all the horror, I am doing my best to keep the memory of those lost ones alive. We - you, me, your children, my children - must never forget."He has received many awards for his work and tireless efforts to promote tolerance and to educate young people about the importance of remembrance and reconciliation and it has made him one of the most inspirational figures in modern Ireland. In 2015, Trinity College Dublin awarded him with an honorary doctorate. He was conferred an honorary doctorate by Dublin City University in March 2016, citing his recent advocacy: "In the past number of years Tomi Reichental has proven to be one of the most inspirational figures in modern Ireland. His effort to ensure that the important themes of remembrance, forgiveness, conflict resolution and reconciliation remain to the forefront of modern Irish thought is truly important. In an age where we see horrific pictures of refugees attempting to flee appalling regimes to find sanctuary in the West, Tomi Reichental is a vivid example of the positive impact refugees make to modern Irish society. Honouring Tomi Reichental with the highest honour that Dublin City University can bestow is a fitting tribute to Tomi and his work. It also expresses this University's commitment to multiculturalism and inclusion and showcases our solidarity with the plight of refugees today, who seek a better life, as Tomi and his family did over fifty years ago.".In 2011, Tomi Reichental's book I Was a Boy in Belsen was first published by O'Brien Press Ltd. In this autobiography, Reichental recounts his experiences as a child prisoner in the Bergen-Belsen concentration camp.In 2007 Tomi was approached by Gerry Gregg, Seamus Deasy, and Oliver Donohoe about making a film about Tomi and his experiences in Bergen-Belsen. Tomi agreed and in late 2007 they traveled to Germany to film Tomi talking about his experiences of the concentration camp, while standing where it once stood.
Read more or edit on Wikipedia 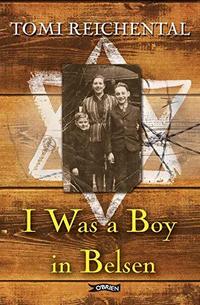 I Was a Boy in Belsen