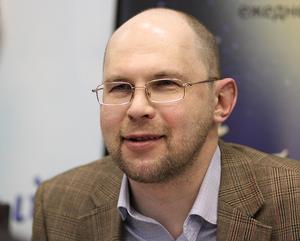 Alexei Viktorovich Ivanov (Russian: Алексе́й Ви́кторович Ивано́в; born November 23, 1969) is a Russian writer. Ivanov was born in Gorky (now Nizhny Novgorod) into a family of shipbuilding engineers. In 1971 the family moved to Perm, where he grew up. In 1987, he entered Ural State University as a journalism student. He left college after a year, returning in 1990 to study art and culturology and getting his degree in 1996. His first publication was a fantastic story called "Hunt for the Great Bear," published in the magazine Uralsky sledopyt in 1990. After returning to Perm, Ivanov worked as a guard, schoolteacher, university teacher, and tourist guide; the latter occupation brought him to study local history, which he later explored in his writing. He first became known for his 2003 novel Serdtse Parmy (The heart of Parma). Ivanov was awarded the Mamin-Sibiryak Prize in 2003; the Eureka, Start, and Bazhov prizes in 2004; and the Book of the Year and Portal prizes in 2006. He has been nominated three times for the National Bestseller prize. In 2010, Ivanov gained notice as "an unrelenting critic of the ... team from Moscow" which was leading a "cultural revolution" from the "top down" in Perm.Ivanov has, according to a newspaper article published on 6 April 2011, never travelled abroad.The 2009 movie "Tsar", written by Ivanov, won 2009 Cannes Film Festival's Un Certain Regard award. The 2013 movie "The Geographer Drank His Globe Away", a screen version of the homonymous Ivanov's 2003 novel, received multiple awards including "Best film" of Russia's main cinematic Nika Award.
Read more or edit on Wikipedia