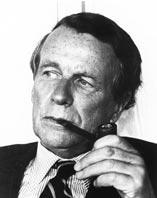 David Mackenzie Ogilvy (; 23 June 1911 – 21 July 1999) was a British advertising tycoon, founder of Ogilvy & Mather, and known as the "Father of Advertising". Trained at the Gallup research organisation, he attributed the success of his campaigns to meticulous research into consumer habits.
Read more or edit on Wikipedia