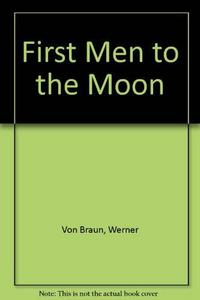 First Men to the Moon

First Men to the Moon is a novella by rocketry expert Wernher von Braun, published in 1960. The book was designed and illustrated by Fred Freeman. Portions of the novella had previously been serialized in the American syndicated Sunday magazine supplement, This Week between 1958 and 1959.Von Braun dedicated the book to his daughters Iris and Margrit, "who will live in a world in which flights to the moon will be commonplace". It was included in The New York Times's "[100] Outstanding Books for Young Readers" on November 13, 1960 and was translated into German as Erste Fahrt zum Mond and French as Les premiers hommes sur la lune, both published in 1961.First Men to the Moon tells the story of John Mason and Larry Carter, fictional astronauts traveling to the Moon. Von Braun based his novella on his own scientific knowledge and includes technical explanations of the journey and diagrams in footnotes in wide margins on each page. The novella describes the use of a method of investigating the interior of the Moon using seismograph-equipped solid propellant rockets.
Read more or edit on Wikipedia