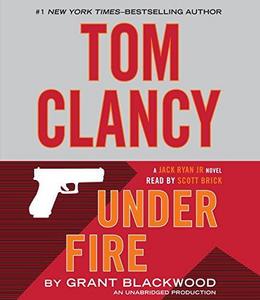 Under Fire (stylized as Tom Clancy Under Fire, Tom Clancy: Under Fire, or Tom Clancy's Under Fire in the United Kingdom) is a political thriller novel, written by Grant Blackwood and released on June 16, 2015. It is the first book in the Jack Ryan Jr. series, which is part of the overall Tom Clancy universe, as well as Blackwood's first solo contribution to the franchise. In the novel, Ryan must choose between his country and his mysterious friend Seth Gregory, who is involved in Dagestan's struggle for independence from the Russian Federation. The book debuted at number four on the New York Times bestseller list.
Read more or edit on Wikipedia