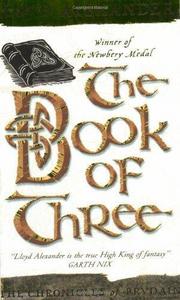 The Book of Three

The Book of Three (1964) is a high fantasy novel by American writer Lloyd Alexander, the first of five volumes in The Chronicles of Prydain. The series follows the adventures of Taran the Assistant Pig-Keeper, a youth raised by Dallben the enchanter, as he nears manhood while helping to resist the forces of Arawn Death-Lord. The book provided many elements of plot for the 1985 Disney animated feature The Black Cauldron.
Read more or edit on Wikipedia

part of the series: The Chronicles of Prydain
original title: The Book of Three
language: English
date of publication: 1964
genre: speculative fiction novel
characters: Taran
followed by: The Black Cauldron