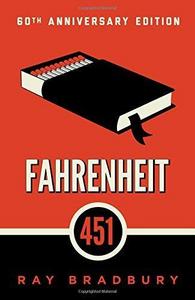 Fahrenheit 451 is a dystopian novel by American writer Ray Bradbury, first published in 1953. Often regarded as one of his best works, the novel presents a future American society where books are outlawed and "firemen" burn any that are found. The book's tagline explains the title: "Fahrenheit 451 – the temperature at which book paper catches fire, and burns..." The lead character, Guy Montag, is a fireman who becomes disillusioned with his role of censoring literature and destroying knowledge, eventually quitting his job and committing himself to the preservation of literary and cultural writings. The novel has been the subject of interpretations focusing on the historical role of book burning in suppressing dissenting ideas for change. In a 1956 radio interview, Bradbury said that he wrote Fahrenheit 451 because of his concerns at the time (during the McCarthy era) about the threat of book burning in the United States. In later years, he described the book as a commentary on how mass media reduces interest in reading literature.In 1954, Fahrenheit 451 won the American Academy of Arts and Letters Award in Literature and the Commonwealth Club of California Gold Medal. It later won the Prometheus "Hall of Fame" Award in 1984 and a "Retro" Hugo Award, one of only seven Best Novel Retro Hugos ever given, in 2004. Bradbury was honored with a Spoken Word Grammy nomination for his 1976 audiobook version.Adaptations of the novel include François Truffaut's 1966 film adaptation and a 1982 BBC Radio dramatization. Bradbury published a stage play version in 1979 and helped develop a 1984 interactive fiction computer game titled Fahrenheit 451, as well as a collection of his short stories titled A Pleasure to Burn. HBO released a television film based on the novel and written and directed by Ramin Bahrani in 2018.
Read more or edit on Wikipedia