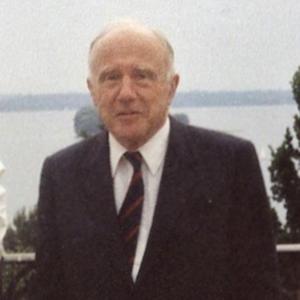 John Archibald Wheeler (July 9, 1911 – April 13, 2008) was an American theoretical physicist. He was largely responsible for reviving interest in general relativity in the United States after World War II. Wheeler also worked with Niels Bohr in explaining the basic principles behind nuclear fission. Together with Gregory Breit, Wheeler developed the concept of the Breit–Wheeler process. He is best known for popularizing the term "black hole," as to objects with gravitational collapse already predicted during the early 20th century, for inventing the terms "quantum foam", "neutron moderator", "wormhole" and "it from bit", and for hypothesizing the "one-electron universe". Wheeler earned his doctorate at Johns Hopkins University under the supervision of Karl Herzfeld, and studied under Breit and Bohr on a National Research Council fellowship. During 1939 he collaborated with Bohr to write a series of papers using the liquid drop model to explain the mechanism of fission. During World War II, he worked with the Manhattan Project's Metallurgical Laboratory in Chicago, where he helped design nuclear reactors, and then at the Hanford Site in Richland, Washington, where he helped DuPont build them. He returned to Princeton after the war ended, but returned to government service to help design and build the hydrogen bomb in the early 1950s. For most of his career, Wheeler was a professor of physics at Princeton University, which he joined in 1938, remaining until his retirement in 1976. At Princeton he supervised 46 PhD students, more than any other professor in the Princeton physics department.
Read more or edit on Wikipedia