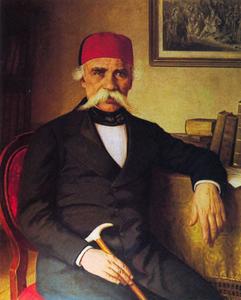 Vuk Stefanović Karadžić (Serbian Cyrillic: Вук Стефановић Караџић, pronounced [ʋûːk stefǎːnoʋitɕ kâradʒitɕ]; 6 November 1787 (26 October OS) – 7 February 1864) was a Serbian philologist, anthropologist and linguist. He was one of the most important reformers of the modern Serbian language. For his collection and preservation of Serbian folktales, Encyclopædia Britannica labelled him "the father of Serbian folk-literature scholarship." He was also the author of the first Serbian dictionary in the new reformed language. In addition, he translated the New Testament into the reformed form of the Serbian spelling and language.He was well known abroad and familiar to Jacob Grimm, Johann Wolfgang von Goethe and historian Leopold von Ranke. Karadžić was the primary source for Ranke's Die serbische Revolution ("The Serbian Revolution"), written in 1829.
Read more or edit on Wikipedia