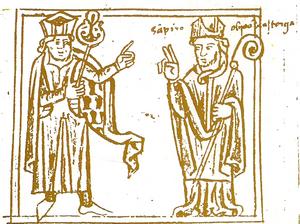 Sampiro (c. 956 – 1041) was a Leonese cleric, politician, and intellectual, one of the earliest chroniclers of post-conquest Spain known by name. He was also the Bishop of Astorga from 1034 or 1035 until his death. According to some sources he was born at Iglesia del Campo in the Bierzo, near Cacabelos, at times confused with Sorribas because at the time it lay within the latter. According to other sources he was born at Zamora. Further, it is uncertain whether all contemporary references to persons named Sampiro refer to the same individual or multiple ones.As a young man Sampiro entered a monastery, either Sahagún or San Miguel de Camarzana. Later he fled to Zamora in light of raids from Muslim territory, and eventually found himself in the royal court at León. He served as a notary to Vermudo II (984–999) and held the highest office at court, that of majordomo, under Alfonso V (999–1028). He was appointed bishop of Astorga round 1034.Sampiro's chronicle was composed as a continuation of the Chronicle of Alfonso III and as such relates events between the years 866 and 982, when it abruptly stops, though it was evidently written in the early eleventh century. It forms part of the Corpus Pelagianum, a series of histories each continuing the last stretching back to Isidore of Seville's Historia Gothorum. A redaction of the chronicle of Sampiro was incorporated into the Historia Silense. Sampiro praises his master, King Vermudo, as "quite prudent [because] he confirmed the laws dictated by Wamba, ordered the opening and studying of the collection of canons, loved mercy and justice, and tried to reprove evil and choose the good." The statement about the laws of Wamba (leges a Vambano principe conditas firmavit), otherwise unknown for his legislative action, is probably an error for Egica, who made a major revision of the Lex Visigothorum and who was held by Leonese writers of the time to have been related to Wamba. The later historian Pelayo of Oviedo, who continued Sampiro's chronicle down to his own age, replaced this laudatory section with an attack on the king, bequeathing to historiography the nickname by which Vermudo II is always known: "the Gouty" (el Gotoso).
Read more or edit on Wikipedia