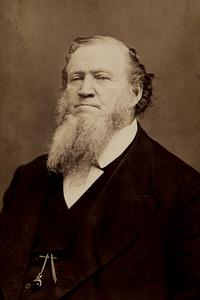 Brigham Young (; June 1, 1801 – August 29, 1877) was an American religious leader, politician, and settler. He was the second president of The Church of Jesus Christ of Latter-day Saints (LDS Church) from 1847 until his death in 1877. He founded Salt Lake City and he served as the first governor of the Utah Territory. Young also led the foundings of the precursors to the University of Utah and Brigham Young University. Young had many nicknames, among the most popular being "American Moses" (alternatively, the "Modern Moses" or "Mormon Moses"), because, like the biblical figure, Young led his followers, the Mormon pioneers, in an exodus through a desert, to what they saw as a promised land. Young was dubbed by his followers the "Lion of the Lord" for his bold personality and commonly was called "Brother Brigham" by Latter-day Saints. A polygamist, Young had 55 wives. He instituted a church ban against conferring the priesthood on men of black African descent, and also led the church during the Utah War against the United States.
Read more or edit on Wikipedia 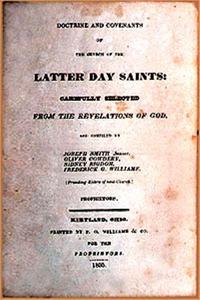 Part of the scriptural canons of denominations of the Latter Day Saint movement. 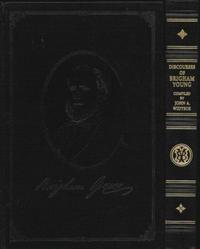