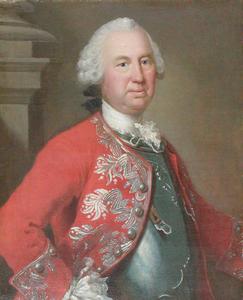 Laurids Lauridsen de Thurah, known as Lauritz de Thurah (4 March 1706 – 5 September 1759), was a Danish architect and architectural writer. He became the most important Danish architect of the late baroque period. As an architectural writer and historian he made a vital contribution to the understanding of both Denmark's architectural heritage and building construction in his day.De Thurah was a self-taught architect who learned much of what he knew by studying the inspiring buildings he saw on his travels outside Denmark between 1729 and 1731. He brought home the baroque style, which was then popular, but was quickly losing way to rococo. Throughout his life he maintained a loyalty to the baroque, even as the world around him continued to change and he lost work assignments to others who mastered the newer, more popular styles.
Read more or edit on Wikipedia