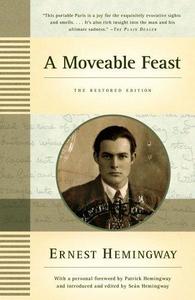 A Moveable Feast is a 1964 memoir by American author Ernest Hemingway about his years as a struggling expat journalist and writer in Paris during the 1920s. It was published posthumously. The book details Hemingway's first marriage to Hadley Richardson and his associations with other cultural figures of the Lost Generation in Interwar France. The memoir consists of various personal accounts by Hemingway and involves many notable figures of the time, such as Sylvia Beach, Hilaire Belloc, Bror von Blixen-Finecke, Aleister Crowley, John Dos Passos, F. Scott and Zelda Fitzgerald, Ford Madox Ford, James Joyce, Wyndham Lewis, Pascin, Ezra Pound, Evan Shipman, Gertrude Stein, Alice B. Toklas and Hermann von Wedderkop. The work also references the addresses of specific locations such as bars, cafes, and hotels, many of which can still be found in Paris today. Ernest Hemingway's suicide in July 1961 delayed the publication of the book due to copyright issues and several edits which were made to the final draft. The memoir was published posthumously in 1964, three years after Hemingway's death, by his fourth wife and widow, Mary Hemingway, based upon his original manuscripts and notes. An edition altered and revised by his grandson, Seán Hemingway, was published in 2009.
Read more or edit on Wikipedia