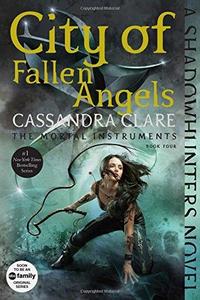 City of Fallen Angels is the fourth book in The Mortal Instruments series by Cassandra Clare. The series was meant to end with City of Glass; it was announced in March 2010 that a fourth book would be added, with Cassandra Clare later saying that she views this as a "second trilogy" in the series. The book was released on April 5, 2011.
Read more or edit on Wikipedia