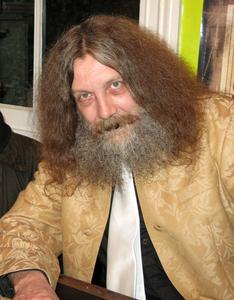 Alan Moore (born 18 November 1953) is an English writer known primarily for his work in comic books including Watchmen, V for Vendetta, The Ballad of Halo Jones, Swamp Thing, Batman: The Killing Joke and From Hell. He is widely recognised among his peers and critics as one of the best comic book writers in the English language. Moore has occasionally used such pseudonyms as Curt Vile, Jill de Ray, Brilburn Logue, and Translucia Baboon; also, reprints of some of his work have been credited to The Original Writer when Moore requested that his name be removed.Moore started writing for British underground and alternative fanzines in the late 1970s before achieving success publishing comic strips in such magazines as 2000 AD and Warrior. He was subsequently picked up by DC Comics as "the first comics writer living in Britain to do prominent work in America",: 7  where he worked on major characters such as Batman (Batman: The Killing Joke) and Superman (Whatever Happened to the Man of Tomorrow?), substantially developed the character Swamp Thing, and penned original titles such as Watchmen. During that decade, Moore helped to bring about greater social respectability for comics in the United States and United Kingdom.: 11  He prefers the term "comic" to "graphic novel". In the late 1980s and early 1990s he left the comic industry mainstream and went independent for a while, working on experimental work such as the epic From Hell and the prose novel Voice of the Fire. He subsequently returned to the mainstream later in the 1990s, working for Image Comics, before developing America's Best Comics, an imprint through which he published works such as The League of Extraordinary Gentlemen and the occult-based Promethea. In 2016, he published Jerusalem: a 1,266-page experimental novel set in his hometown of Northampton, UK. Moore is an occultist, ceremonial magician, and anarchist, and has featured such themes in works including Promethea, From Hell, and V for Vendetta, as well as performing avant-garde spoken word occult "workings" with The Moon and Serpent Grand Egyptian Theatre of Marvels, some of which have been released on CD. Despite his objections, Moore's works have provided the basis for several Hollywood films, including From Hell (2001), The League of Extraordinary Gentlemen (2003), V for Vendetta (2005), and Watchmen (2009). Moore has also been referenced in popular culture and has been recognised as an influence on a variety of literary and television figures including Neil Gaiman, and Damon Lindelof. He has lived a significant portion of his life in Northampton, England, and he has said in various interviews that his stories draw heavily from his experiences living there.
Read more or edit on Wikipedia