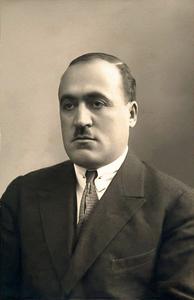 Mammad Said Ordubadi (Azerbaijani: Məmməd Səid Ordubadi; 24 March 1872, Ordubad - 1 May 1950, Baku) was Azerbaijani writer, poet, playwright and journalist. Ordubadi, started his career as a poet. His articles and poetry were published in many of the magazines in Azerbaijani language at that time. During the Iranian Constitutional Revolution, Ordubadi joined Muslim Social Democratic Party (Hummet). He then published Bloody Years about the clashes between Armenian and Azerbaijani populations in 1905. In 1918, he joined to Communist Party and his articles have published in the official newspaper of Hummet organization. He, along with XI Red Army, goes to Dagestan and publishes Red Dagestan magazine there. After the Sovietization of Azerbaijan he returns to Baku. Today, Ordubadi is remembered as one of the most important intellectuals of Azerbaijan during Soviet era. He served twice as a deputy of the Supreme Soviet of the Azerbaijan SSR, the highest legislative institution in the country. His novels include Sword and the Pen, about the personality of Nizami Ganjavi, Foggy Tabriz about the Iranian constitutional revolution, also Mysterious Baku and Fighting City which both are about the revolutionary activities of Bolsheviks and 26 Baku Commissars. He also published articles about Narimanovism about the activity of national communism symbol in Azerbaijan, Nariman Narimanov.
Read more or edit on Wikipedia