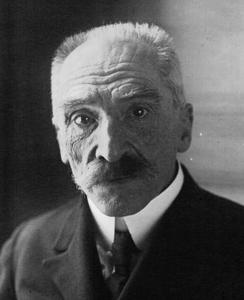 Édouard Estaunié (4 February 1862 in Dijon – 2 April 1942 in Paris) was a French novelist. Estaunié trained as a scientist and engineer before turning to the novel in 1891. In 1904, he devised the word "telecommunication". He was elected to the Académie française in 1923. He was also a reviewer, critic, and homme de lettres as well as a novelist.
Read more or edit on Wikipedia