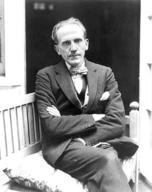 Alan Alexander Milne (; 18 January 1882 – 31 January 1956) was an English writer best known for his books about the teddy bear Winnie-the-Pooh, as well as for children's poetry. Milne was primarily a playwright before the huge success of Winnie-the-Pooh overshadowed all his previous work. Milne served in both World Wars, as a lieutenant in the Royal Warwickshire Regiment in the First World War and as a captain in the Home Guard in the Second World War.Milne was the father of bookseller Christopher Robin Milne, upon whom the character Christopher Robin is based. It was during a visit to London Zoo, where Christopher became enamoured with the tame and amiable bear Winnipeg, that Milne was inspired to write the story of Winnie-the-Pooh for his son. Source: Wikipedia (en)