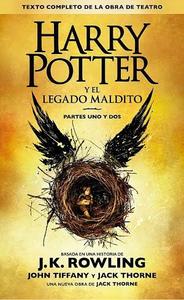 Harry Potter and the Cursed Child

Harry Potter and the Cursed Child is a 2016 British two-part play written by Jack Thorne based on an original story by J. K. Rowling, John Tiffany, and Thorne. Previews of the play began at the Palace Theatre, London on 7 June 2016, and it premiered on 30 July 2016. The play opened on Broadway on 22 April 2018 at the Lyric Theatre, with previews starting on 16 March 2018. Its cast is similar to that of the first year on West End, with returning actors Anthony Boyle, Sam Clemmett, Noma Dumezweni, Poppy Miller, Jamie Parker, Alex Price, and Paul Thornley. The story begins nineteen years after the events of the 2007 novel Harry Potter and the Deathly Hallows and follows Harry Potter, now Head of the Department of Magical Law Enforcement at the Ministry of Magic, and his younger son Albus Severus Potter, who is about to attend Hogwarts School of Witchcraft and Wizardry. The play is marketed as the eighth official story in the Harry Potter series. The play received enthusiastic critical reception. At the 2017 Laurence Olivier Awards, the London production received a record-breaking eleven nominations and won another record-breaking nine awards, including Best New Play. At the 2018 Tony Awards, the Broadway production won six awards, including Best Play. The play also set the record for highest all-time weekly ticket sales of any play, grossing over $2.5 million at the Lyric Theater for the week ending 30 December 2018.
Read more or edit on Wikipedia