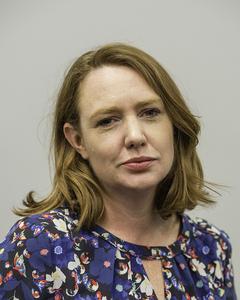 Paula Hawkins (born 26 August 1972) is a British author best known for her top-selling psychological thriller novel The Girl on the Train (2015), which deals with themes of domestic violence, alcohol, and drug abuse. The novel was adapted into a film starring Emily Blunt in 2016. Hawkins' second thriller novel, Into the Water, was released in 2017.
Read more or edit on Wikipedia