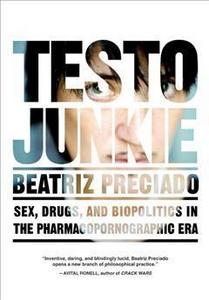 Testo Junkie (published in English with the subtitle Sex, Drugs, and Biopolitics in The Pharmacopornographic Era) is a book, described as "auto-theory", by contemporary writer and philosopher Paul B. Preciado, first published in Spanish in 2008 (Testo yonqui / Espasa Calpe), then in English in 2013 by The Feminist Press, translated by Bruce Benderson. It chronicles Preciado's multifaceted and liminal experience taking a topical testosterone called Testogel as a political and performative act, while working in Paris, France, as well as intertwining perspectives on pharmaceuticals and pornography. The book was the choice of McKenzie Wark in a list of the 11 best scholarly books of the 2010s by The Chronicle of Higher Education.
Read more or edit on Wikipedia