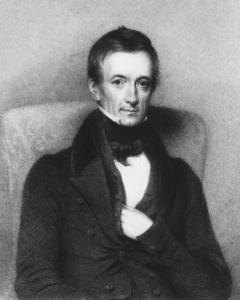 Peter Mark Roget (UK: US: ; 18 January 1779 – 12 September 1869) was a British physician, natural theologian, lexicographer and founding secretary of The Portico Library. He is best known for publishing, in 1852, the Thesaurus of English Words and Phrases, a classified collection of related words. He also read a paper to the Royal Society about a peculiar optical illusion in 1824, which is often regarded as the origin of the persistence of vision theory that was later commonly used to explain apparent motion in film and animation.
Read more or edit on Wikipedia