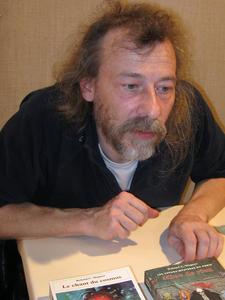 Roland C. Wagner (6 September 1960 – 5 August 2012) was a French writer of humorous science fiction. Since his professional debut in 1981, he had written around one hundred novellas and around fifty novels. He was the only writer to have received the Prix Rosny-Aîné seven times, as well as many other awards.
Read more or edit on Wikipedia