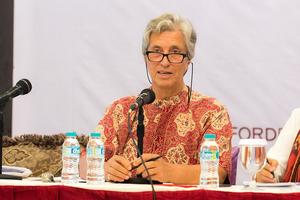 Saskia Eleonora Wieringa (born 1950) is a Dutch sociologist. She is a professor of Gender and Women's Same-Sex Relations Crossculturally at the Faculty of Social and Behavioural Sciences at the University of Amsterdam. The area of study was established by the Foundation for Lesbian and Gay Studies and sponsored by Hivos. From 1 April 2005 to 19 April 2012, she served as the director of Aletta, Institute for Women's History (currently Atria Institute on gender equality and women's history) in Amsterdam.
Read more or edit on Wikipedia