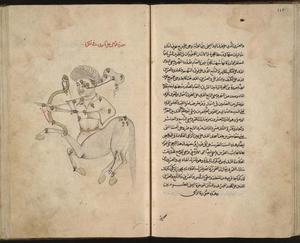 The Book of Fixed Stars (Arabic: كتاب صور الكواكب‎ kitāb suwar al-kawākib, literally The Book of the Shapes of Stars) is an astronomical text written by Abd al-Rahman al-Sufi (Azophi) around 964. Following the translation movement in the 9th Century AD, the book was written in Arabic, the common language for scholars across the vast Islamic territories, although the author himself was Persian. It was an attempt to create a synthesis of the comprehensive star catalogue in Ptolemy’s Almagest (books VII and VIII) with the indigenous Arabic astronomical traditions on the constellations (notably the Bedouin constellation system of the Anwā’). The original manuscript no longer survives as an autograph, however, the importance of tradition and the practice of diligence central to Islamic manuscript tradition, has ensured the survival of the Book of Stars in later-made copies.
Read more or edit on Wikipedia