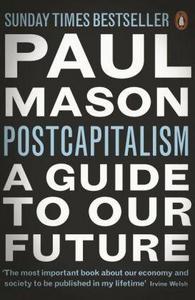 PostCapitalism: A Guide to our Future

PostCapitalism: A Guide to Our Future is a 2015 book by British journalist and writer Paul Mason. In the book, Mason discusses the existential threat posed to capitalism by the digital revolution. He argues that the digital revolution has the potential to reshape utterly our familiar notions of work, production and value; and to destroy an economy based on markets and private ownership. In fact, he contends, this is already happening. He points to parallel currencies, co-operatives, self-managed online spaces, even Wikipedia as examples of what the postcapitalist future might look like. Mason argues that from the ashes of the financial crisis of 2007–2008, we have the chance to create a more socially just and sustainable global economy.
Read more or edit on Wikipedia

Technology and the virtues : a philosophical guide to a future worth wanting

Back to our future

Election!: A Kid's Guide to Picking Our President

How To Know Ferns: A Guide To The Names, Haunts, And Habits Of Our Common Ferns

How To Know The Ferns: A Guide To The Names, Haunts, And Habits Of Our Common Ferns

Our Time Is Now: A Woman's Guide to Creating a Life and World You Will Love