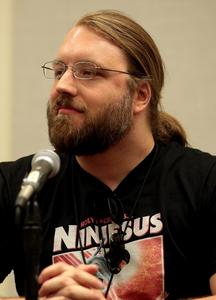 Scott Lynch (born April 2, 1978) is an American fantasy author who wrote the Gentleman Bastard Sequence series of novels. His first novel, The Lies of Locke Lamora, was purchased by Orion Books in August 2004 and published in June 2006 under the Gollancz imprint in the United Kingdom and under the Bantam imprint in the United States. The next two novels in the series, Red Seas Under Red Skies and The Republic of Thieves, were published in 2007 and 2013, respectively.
Read more or edit on Wikipedia