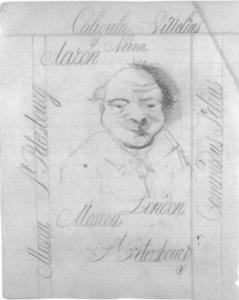 The Idiot (pre-reform Russian: Идіотъ; post-reform Russian: Идиот, tr. Idiót) is a novel by the 19th-century Russian author Fyodor Dostoevsky. It was first published serially in the journal The Russian Messenger in 1868–69. The title is an ironic reference to the central character of the novel, Prince (Knyaz) Lev Nikolayevich Myshkin, a young man whose goodness, open-hearted simplicity and guilelessness lead many of the more worldly characters he encounters to mistakenly assume that he lacks intelligence and insight. In the character of Prince Myshkin, Dostoevsky set himself the task of depicting "the positively good and beautiful man." The novel examines the consequences of placing such a unique individual at the centre of the conflicts, desires, passions and egoism of worldly society, both for the man himself and for those with whom he becomes involved. Joseph Frank describes The Idiot as "the most personal of all Dostoevsky's major works, the book in which he embodies his most intimate, cherished, and sacred convictions." It includes descriptions of some of his most intense personal ordeals, such as epilepsy and mock execution, and explores moral, spiritual and philosophical themes consequent upon them. His primary motivation in writing the novel was to subject his own highest ideal, that of true Christian love, to the crucible of contemporary Russian society. The artistic method of conscientiously testing his central idea meant that the author could not always predict where the plot was going as he was writing. The novel has an awkward structure, and many critics have commented on its seemingly chaotic organization. According to Gary Saul Morson, "The Idiot violates every critical norm and yet somehow manages to achieve real greatness." Dostoevsky himself was of the opinion that the experiment was not entirely successful, but the novel remained his favourite among his works. In a letter to Strakhov he wrote: "Much in the novel was written hurriedly, much is too diffuse and did not turn out well, but some of it did turn out well. I do not stand behind the novel, but I do stand behind the idea."
Read more or edit on Wikipedia