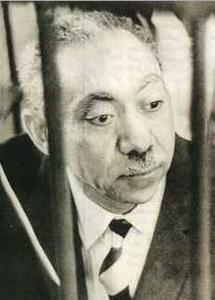 Sayyid 'Ibrāhīm Ḥusayn Quṭb ( or ; Egyptian Arabic pronunciation: [ˈsæjjed ˈʔotˤb], Arabic: [ˈsæjjɪd ˈqʊtˤb]; Arabic: سيد قطب إبراهيم حسين‎ Sayyid Quṭb; 9 October 1906 – 29 August 1966), known popularly as Sayyid Qutb (Arabic: سيد قطب‎), was an Egyptian author, educator, Islamic scholar, theorist, revolutionary, poet, and a leading member of the Egyptian Muslim Brotherhood in the 1950s and 1960s. In 1966, he was convicted of plotting the assassination of Egyptian President Gamal Abdel Nasser and was executed by hanging. He is considered as "the Father of Salafi jihadism", the religio-political doctrine that underpins the ideological roots of Global Jihadist organisations such as al-Qaeda and ISIL.Author of 24 books, with around 30 books unpublished for different reasons (mainly destruction by the state), and at least 581 articles, including novels, literary arts critique and works on education, he is best known in the Muslim world for his work on what he believed to be the social and political role of Islam, particularly in his books Social Justice and Ma'alim fi al-Tariq (Milestones). His magnum opus, Fi Zilal al-Quran (In the Shade of the Qur'an), is a 30-volume commentary on the Quran.During most of his life, Qutb's inner circle mainly consisted of influential politicians, intellectuals, poets and literary figures, both of his age and of the preceding generation. By the mid-1940s, many of his writings were included in the curricula of schools, colleges and universities.Even though most of his observations and criticism were leveled at the Muslim world, Qutb is also known for his intense disapproval of the society and culture of the United States, which he saw as materialistic, and obsessed with violence and sexual pleasures. He advocated violent, offensive jihad. Qutb has been described by followers as a great thinker and martyr for Islam, while many Western observers (and some Muslims) see him as a key originator of Islamist ideology, and an inspiration for violent Islamist groups such as al-Qaeda. Qutb is widely regarded as one of the most leading Islamist ideologues of the twentieth century. Strengthened by his status as a martyr, Qutb's ideas on Jahiliyya and his close linking of implementation of Shari'ah (Islamic Law) with Tawhid (Islamic monotheism) has highly influenced contemporary Islamist and Jihadist movements. Today, his supporters are identified by their opponents as "Qutbists" or "Qutbi".
Read more or edit on Wikipedia