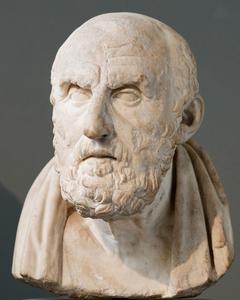 Chrysippus of Soli (; Greek: Χρύσιππος ὁ Σολεύς, Chrysippos ho Soleus; c. 279 – c. 206 BC) was a Greek Stoic philosopher. He was a native of Soli, Cilicia, but moved to Athens as a young man, where he became a pupil of Cleanthes in the Stoic school. When Cleanthes died, around 230 BC, Chrysippus became the third head of the school. A prolific writer, Chrysippus expanded the fundamental doctrines of Zeno of Citium, the founder of the school, which earned him the title of Second Founder of Stoicism.Chrysippus excelled in logic, the theory of knowledge, ethics, and physics. He created an original system of propositional logic in order to better understand the workings of the universe and role of humanity within it. He adhered to a deterministic view of fate, but nevertheless sought a role for personal freedom in thought and action. Ethics, he thought, depended on understanding the nature of the universe, and he taught a therapy of extirpating the unruly passions which depress and crush the soul. He initiated the success of Stoicism as one of the most influential philosophical movements for centuries in the Greek and Roman world. Of his written works, none have survived except as fragments. Recently, segments of some of his works were discovered among the Herculaneum papyri.
Read more or edit on Wikipedia